There was just one generation of the Cobalt, which ran from 2005-10. It was succeeded by the Chevrolet Cruze for 2011.

The Cobalt itself replaced the long-running Chevy Cavalier, which was both smaller and of much poorer quality. The Chevy Cobalt was available as a coupe or sedan. Trim levels (depending on body style) consisted of base, LS, well-equipped LT, luxury-themed LTZ, Sport and high-performance SS.

The base and mid-trim models have mostly stood pat through the years. Apart from the SS and short-lived Sport trims, all Cobalts were powered by a 2.2-liter four-cylinder that initially made 145 horsepower (increased to 155 hp for '09). Transmission choices consisted of a five-speed manual and a four-speed automatic. Even with the base engine, the Chevy Cobalt provided decent acceleration along with excellent fuel economy. Lower and midlevel trims were typically equipped with air-conditioning, full power accessories, cruise control and a stereo with CD player. Upper trims may have leather upholstery, an upgraded Pioneer stereo, a USB port, a sunroof and remote start. Rear disc brakes and ABS were optional except on the highest trim levels. Side curtain airbags were optional.

The most significant changes for non-SS Cobalts were the addition of standard side curtain airbags for '08, the debut of the bare-bones XFE (extra fuel economy) model that same year, and the aforementioned boost in power for the base engine.

The SS was available initially only as a coupe with a 2.0-liter supercharged four that made 205 hp, matched to either a five-speed manual or a four-speed automatic. A sport-tuned suspension, bigger wheels and sport seats were other SS perks. For 2006 the SS line was expanded to include a coupe and sedan powered by a 2.4-liter, 171-hp version of the base 2.2-liter engine. The supercharged coupe was still available, and was called the SS Supercharged to avoid confusion with the lesser SS trims. 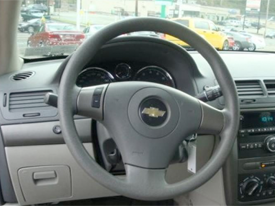