The Ford Focus has been Ford's entry-level car since the start of the new millennium. This front-wheel-drive displays a surprising amount of character from behind the wheel. Its affordable price, expressive styling and availability in multiple body styles have all contributed to making this one of Ford's most popular cars worldwide.

Within its cabin, the Ford Focus offers a reasonably attractive environment. One unique feature sets the car apart: Ford's Sync system. Developed in conjunction with Microsoft, this system allows one to operate devices such as a cell phone, PDA and MP3 player via voice commands. Other notable features, such as keyless entry, antilock brakes and stability control, come standard across all Ford Focus trims.

The Ford Focus is currently available as a coupe and as a sedan. The four-door is available in S, SE, SES and SEL trim levels, while the coupe comes as the SE and SES. All Ford Focus models are powered by a 2.0-liter inline four-cylinder that offers 140 horsepower. A five-speed manual transmission is standard, with a four-speed automatic offered as an option.

Behind the wheel of the Ford Focus, you'll likely be pleased with the relatively quiet and smooth ride quality. Engine performance is also respectable for a small car. To its credit, the Focus has commendable steering response and feedback when driven hard. 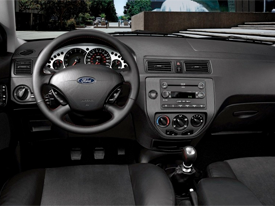