When it hit the market for the 1986 model year, the Ford Taurus quickly became a sensation in America. This front-wheel-drive midsize family sedan looked like no other Ford before it thanks to aerodynamic styling highlighted by a grille-less nose that fronted an elegant, rounded form. A well-thought-out, comfortable and roomy cabin greeted passengers A year later, the Taurus was Ford's best-selling car.

Bridging the gap between family sedans and large luxury cars, the Ford Taurus is a big, comfortable American-style sedan with an up-to-date design. The typical Ford Taurus will be front-wheel drive with the base 3.5-liter V6, a solid engine that cranks out 263 hp. All-wheel drive is optional on upper Ford Taurus trim levels and standard on the high-performance SHO model, which employs a twin-turbo 3.5-liter V6 good for a healthy 365 hp. A six-speed automatic is the only available transmission.

In reviews, we've generally been impressed by the current Ford Taurus. The styling is distinctive, as is the cabin with its twin-cowl dashboard layout. On the road, the Ford Taurus provides solid if unexciting driving dynamics and a comfortable, quiet ride. Performance ranges from ample with the base V6 to thrilling with the SHO's twin-turbocharged V6, which provides V8-like thrust at all speeds.

The previous Ford Taurus generation ran from 2000-'06. Although the basic body shell was identical to the third-generation Ford Taurus, this version dispensed with many of the oval-themed components used before and the result was a more attractive car. 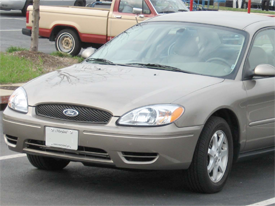 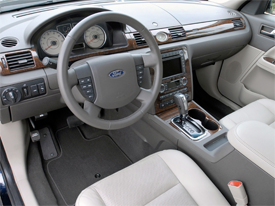