At its debut, the Honda Pilot essentially defined the emerging midsize crossover SUV market. Offering decent V6 power, above-average fuel economy, easy maneuverability, plenty of interior comfort and versatility, and seven-to-eight-passenger seating, it was exactly the kind of vehicle that families leery of the minivan stigma were looking for.

The Honda Pilot has made a point of giving third-row accommodations roomy enough for actual adults to fit back there; if you're looking for a minivan alternative, this one might just work out. Traditional Honda Pilot traits like a well-cushioned ride, a smooth powertrain and optional four-wheel drive are also present and accounted for.

The Honda Pilot is motivated by a 3.5-liter V6 that generates 250 horsepower and 253 pound-feet of torque. A five-speed automatic is the only available transmission. Front-wheel drive is standard, but all Pilot models are available with an all-wheel-drive system that automatically apportions power to the rear wheels -- up to 70 percent -- when front slippage occurs. This system also has a driver-selectable "lock" feature that routes maximum torque to the rear wheels at speeds below 19 mph.

Standard safety equipment included on the Honda Pilot includes stability control, front-seat side airbags and full-length side curtain airbags. The Insurance Institute for Highway Safety likewise awarded the Pilot its top "Good" rating for both frontal-offset and side-impact crashes. 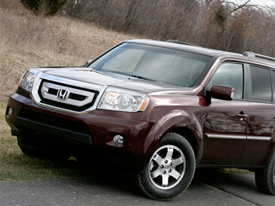