The midsize Mercury Milan has a lot to offer buyers looking for an upscale, right-sized four-door. Like its near identical twin, the Ford Fusion, the Milan got a big makeover last year that included a stylish new exterior, an updated passenger cabin and more powerful and fuel-efficient engines to make it one of the most well-rounded entries in the highly competitive midsize sedan category.

The Mercury Milan comes standard with a 2.5-liter four-cylinder engine that produces 175 horsepower and 172 pound-feet of torque. A six-speed manual is standard on base Mercury Milans, while a six-speed automatic is optional on the base car and standard on the Premier. This engine is available only with front-wheel drive. EPA-estimated fuel economy is 22 mpg city/31 mpg highway and 25 mpg combined with the automatic.

Of all the Mercury Milan's good qualities, the passenger cabin stands out as worthy of special mention. The overall look is attractive, and the use of soft-touch materials gives it a distinctly classy appearance. The interior feels roomy and seats four adults comfortably. In back, a relatively large trunk offers 16.5 cubic feet of cargo room, which is made more useful by the 60/40-split-folding rear seatbacks.

Though it might be easy to write the Mercury Milan off as just another wallflower family sedan, this upscale midsize sedan is actually surprisingly enjoyable to drive. The suspension provides above-average handling with little body roll in turns, while still managing to provide a comfortable ride quality. 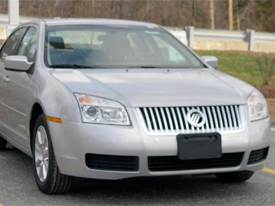