For nearly 20 years, the Mitsubishi Eclipse has been one of America's more popular sport coupes. Reasons for its success include sleek styling, powerful engines, a decent amount of comfort and affordability.

The original Mitsubishi Eclipse was the result of a joint venture started in the mid-'80s between Mitsubishi and Chrysler, known as Diamond Star Motors (DSM). For model-year 1990, at a plant in central Illinois, the Diamond Star triplets bowed -- similar versions of the same Mitsubishi-engineered car, including the Eclipse, the Eagle Talon and the Plymouth Laser. With the subsequent demise of the Eagle and Plymouth brands, only the Mitsubishi Eclipse remains in production.

The Mitsubishi Eclipse comes standard with four-wheel antilock brakes, stability control and front seat side airbags. The coupe features front side curtain airbags and the Mitsubishi Eclipse Spyder gets taller side airbags that cover occupants' heads. There are no rear head restraints. The Eclipse Spyder received the Insurance Institute for Highway Safety's top rating of "Good" in both the frontal-offset and side crash tests. 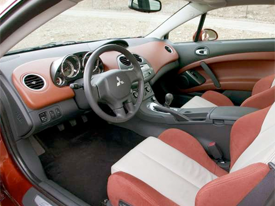