The Nissan Rogue is a comfortable, fun-to-drive compact crossover with an nice interior. It's a strong contender!

The Nissan Rogue is available with either front- or all-wheel drive. It's powered by a 2.5-liter four-cylinder engine that produces 170 horsepower and 175 pound-feet of torque and employs a CVT. An AWD Rogue SL took 9.2 seconds to reach 60 mph, which is competitive with other four-cylinder compact crossovers. Likewise, fuel economy is similar to that of the competition. The front-wheel-drive Nissan Rogue has an EPA estimate of 22 mpg city/27 mpg highway and 24 mpg in combined driving. The AWD variant drops slightly to 21/26/23 mpg.

The Nissan Rogue boasts one of the nicest interiors of any compact crossover at its price point. The seats are comfortable front and rear, the controls are intuitive and the materials are top-notch, particularly the soft-touch dashboard covering, a rarity in this segment. A substantial center console bin, a massive glovebox and a clever under-floor organizer add storage to the Nissan Rogue. 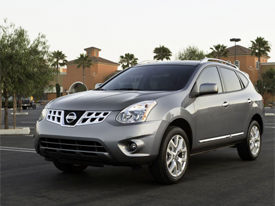