The Saturn Outlook was one of the four "Lambda" crossover SUVs in GM's stable. Like the other Lambda vehicles, the Saturn Outlook packaged the eight-passenger seating, cavernous cargo capacity and carlike driving character of a minivan into the more fashionable shell of a full-size crossover SUV.

All Saturn Outlooks were powered by a 3.6-liter V6 that initially made 270 hp and 248 lb-ft of torque (275 and 251 with the XR's dual exhaust). When direct injection was added for '09, those numbers went up to 281 horsepower and 266 pound-feet of torque (288 hp and 270 lb-ft in the XR). A six-speed automatic was the sole transmission, and all-wheel drive could be ordered in place of front-wheel drive on the Saturn Outlook.

Unlike many competitors in the crossover SUV field, the Saturn Outlook can accommodate adults in all three rows. In addition, the Saturn Outlook's "Smart Slide" second-row seat feature was advantageous, as with the pull of one obvious lever, either of the captain's chairs (or 64/40-split bench halves) easily tilted, slid and sandwiched up against the first-row seats to ease access to the third row. 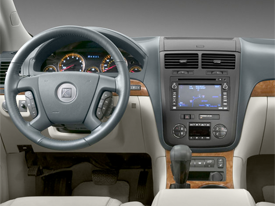