There's a reason the minivan is considered the quintessential vehicle for parents. You see, it's the perfect vehicle for schlepping around the kids and the stuff that comes along with them. No other vehicle can match the minivan's huge interior space, three rows of seating, sliding rear doors and low ride height. Yet as great as a minivan is, it can be overkill for families with just one or two little ones. That's where the 2012 Mazda 5 comes in.

Every Mazda 5 comes with standard stability and traction control, four-wheel antilock disc brakes with brake assist, front side airbags and side curtain airbags. In brake testing, the Mazda 5 came to a stop from 60 mph in 130 feet.

While the Mazda 5 is obviously smaller than the typical minivan, it still packs plenty of interior versatility. The comfortable second-row captain's chairs slide and recline, and the passenger-side seat features a nifty pop-up center table and storage space that can be fitted between the chairs. The third row is big enough for kids and is easier to get into than every crossover third row we can think of.

If you want some added utility but don't want to give up the agility and urban maneuverability of car, the Mazda 5 is an excellent choice. On winding roads, the Mazda 5 rewards the driver with precise steering and controlled body motions. Passengers riding with an enthusiastic driver will also appreciate a retuned suspension that helps keep them from sliding and swaying in their seats. 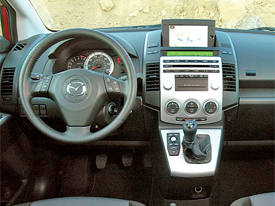 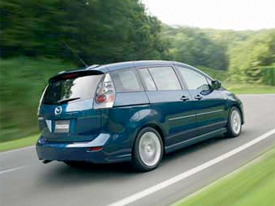